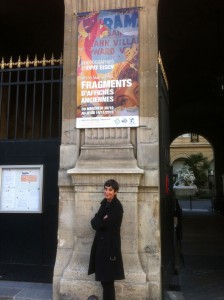 Evvy outside the exhibit in Paris

During a visit to Paris, I saw workmen preparing the walls of the Saint-Sulpice Métro station for renovation. As they peeled back decades of advertisements, fragments of each layer were revealed. Designs, abstractions and surreal collage-like compositions emerged and evolved.

I photographed just steps ahead of the workers as they tore at each section and uncovered parts of each layer. These images existed only at the moment I captured them. Within hours, the platform was stripped bare and what was briefly visible was gone forever.

These photographs were taken with 35mm color film and have not been digitally manipulated. This series has been exhibited in Paris and San Francisco.

The photographs were exhibited in Paris at the RATP* headquarters

*RATP - Régie Autonome des Transports Parisiens is responsible for public transport in Paris and its surrounding Île-de-France region, including the Métro, tram and bus